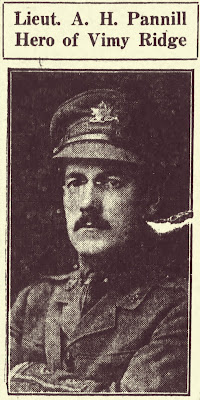 A few short weeks from today marks the 100th anniversary of the Battle of Vimy Ridge, a battle which many Americans may not be familiar with, but to Canadians it packs the symbolic punch of Yorktown, Gettysburg, and Normandy all rolled into one. The Easter day victory by the Canadian Corps on April 9, 1917 provided a stunning success on the stagnate Western Front and gave Canada a place of honor on the world stage. As General Alexander Ross said after the battle, "It was Canada...on parade. I thought then, and I think today, that in those few minutes I witnessed the birth of a nation."

How, then, does one explain a son of Virginia with ties to Zachary Taylor and J.E.B. Stuart charging into battle at Vimy Ridge as a grizzled veteran when his country of origin had only been in the war for three whole days?

Enter Capt. Hunter "Archie" Pannill, a Virginian who served with the C.E.F., bled at Vimy Ridge and earned the Military Cross for his service there, and ended the war with the Royal Flying Corps just for good measure.


Augustus Hunter Pannill was born in the town of Chatham in Pittsylvania County, Virginia at the ancestral family estate of "Whitehorn" on February 21, 1882. The son of David and Augusta Pannill, he was the third of four children in a distinguished Virginia family with roots in the state stretching back to the 17th century.

He attended the Martinsville Military Academy and was a member of the state militia before leaving the country for Canada in 1912. He eventually settled in Toronto and was working as an accountant when he decided to enlist in the Canadian Expeditionary Force in 1916.

Pannill joined the 97th Overseas Battalion, part of the short-lived "American Legion," on February 7, 1916. The American Legion was filled with men born in America who decided to swear allegiance to King George V for various reasons, a sense of adventure and outrage over the sinking of the Lusitania among them. Pannill trained with the 97th for one year before the American Legion was disbanded and its members parceled out to other units in the CEF. The 97th was one of the few units in the Legion to leave Canada for England, but once it arrived it suffered the same fate as the rest of the brigade.

Pannill was transferred to the 38th Battalion as a lieutenant in Company C on February 19, 1917. He did not have much time to adjust to his new unit before he was thrust into his first major combat of the war – Vimy Ridge on "Bloody Easter," April 9, 1917.

The 38th was part of the 12th Infantry Brigade of the 4th Canadian Division on the far left flank of the attack. The Division’s objective on April 9th was Hill 145, now site of the majestic Vimy Memorial. The 38th Battalion would anchor the right flank of the 12th Brigade’s line with the 72nd Battalion in the center and the 73rd Battalion on the left. Pannill and his men would go in with the 38th’s second wave and were tasked with capturing a portion of the infamous "Red Line" of German trenches.


The attack was preceded with two weeks of pounding from the artillery along with several trench raids, a botched gas attack, aerial bombardment, and the explosion of several mines. A rolling barrage would also precede each wave of attacking infantry and Pannill recalled:

"The artillery strafe was the most dazzling thing I ever witnessed. I looked back and saw rows of guns go off, each in its turn, yet so fast that the flashes seemed like a tooth-edged ribbon of flames."

That said, Pannill admitted, "When the time came [to attack] I did not notice…I was busy issuing rum to the men and everyone was taking a last look at his tools."

When it was Company C’s turn to move out, Pannill stood up and waved his hands, shouting "Come on, fellows!" before going over the top. Due to the timing of the rolling barrage, the Virginian soon learned that "it was no use hurrying" and in a dry manner related that "we just walked ahead."

The men of the 38th had to advance over ground that was so heavily shelled that it resembled the surface of the moon. Massive shell craters that had filled with water over time posed a serious threat to any soldier unlucky enough to fall in after being wounded.

Pannill remembered one such crater in which "four or five [men] had crawled there wounded and died." The other sights he recalled from that day were equally harrowing:

"A great many of our dead were scattered everywhere...One dead man was split wide open, apparently having been hit squarely by a shell."

Thankfully, the line that the 38th was charged with taking was occupied quickly. Pannill stated matter-of-factly:

"We took the second line without much of a fight. The Boches came running up…in swarms…calling 'Mercy, kamarade, mercy, kamarade!'"

Pannill then took 35 men ahead of the main line to establish an advance position. Before setting out he learned that his commanding officer had been wounded and that he was now in command of Company C. He oversaw the digging of the new line and turned around to report what had happened to higher headquarters when he was hit by a piece of shrapnel that shattered his wrist.

The Official War Diary of the 38th Battalion for April 9th recorded:

"At 10:15 a.m. Lieut. A.H. Pannell [sic] of ‘C’ Company sent in report by runner that he had occupied position in front of crater No. 5 and was consolidating same…Orders were sent to Lieut. Pannell by return runner to connect with Major Howland and Capt. MacDowell giving their locations to him. Runners report a great deal of sniping from our right."

Pannill would hold the line until he was finally relieved after 36 hours with no medical attention.

Four days after his wounding he was sent to London to recover from his wounds. Word quickly spread of the daring exploits of this young American officer and before he was hobnobbing with the elite of British society.

"I am well of my wound…I have been meeting a lot of very interesting people. I have a snap shot which was taken at the Astors of a group containing the Duke of Connaught, Princess Patricia, several other prominent people, and myself."

Pannill’s superiors put him in for the Military Cross and he had the award pinned on his chest by King George V himself at a special ceremony at Buckingham Palace that August.
His citation read:

"For conspicuous gallantry and devotion in operations. He led his platoon in an assault, and although wounded, he gained and consolidated the objective, holding the position for five days and until relieved."

One might assume that the experience of Vimy Ridge cured Pannill of all desire to continue as a foot-slogger, as he never returned to his battalion. Instead, he transferred to Royal Flying Corps on June 12, 1917.

Pannill joined the legendary Number 43 Squadron, which would come to be known after the war as "The Fighting Cocks" of the RAF. He served as a Lewis gunner for a few short weeks before his plane crashed on September 1, 1917. In no time at all he found himself back in a London hospital with fractured hips fractured and two broken legs.

While recovering, he was approached by an American reporter who asked him how easy it was to fly a plane.

In an impressive display of dry wit, he responded:

"All you have to do is keep your mind on the weather and the light, the speed of your own machine and its personal idiosyncrasies, the speed of the German machine – or machines, if there are more than one – the exact angle of your approach to him or his approach to you, the speed of the bullets you fire, your height from the ground, with special relation to the German anti-crafter, the proximity of the German trenches – we do most of the fighting on the German side, you now – whether your adversary is a single seater and therefore capable of firing only through the propeller and hence can only hit you when he is aimed pointblank or is a two-seater with an observer and a machine gun ready to pop off from most any angle – and certain tricks of machine manipulation."

The reporter, no doubt cracking a smile, replied, "Is that all?"

While his sense of humor was still in fighting trim, his body was not and he was eventually sent to Canada on 6 months leave in June of 1918. During this period he paid a visit to his home state for the first time in over six years. One can only ponder what went through his head as he hobbled off of the train to see his family after experiencing so much.

"He arrived…with his left leg one inch, and his right, an inch-and-a-half shorter than when he went into service, an airplane crash being responsible for severe fractures which kept him in the hospital for nearly a year. Now, he is just beginning to walk again and is hoping to get back to the line."

Mercifully, however, Pannill's war was over. He returned to Canada in November 1918 just as war ended stayed on the rolls of the Royal Flying Corps until deemed medically unfit in March of 1919.

Pannill stayed in the nation he had sacrificed so much for and eventually settled in Kitchener, Ontario. He married in 1925 found good work in the lumber business. He established the Pannill Veneer Company in 1943, a business that employed more than 200 people at its height before closing its doors in 2002.


Pannill devoted himself to the lumber trade for the rest of his life and was well-known as a local war hero and businessman. He died on June 3, 1968 at the age of 87 and is buried next to his wife Hazel in Woodland Cemetery. 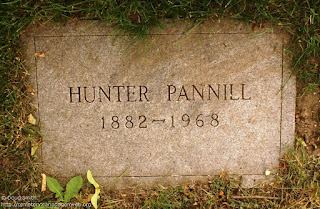