On a windswept hill overlooking the James River in Richmond, Virginia lies a white marble memorial headstone that reads, “First Richmond Boy Killed in the World War.”
The stone commemorates the service of Private John C. Thurston, a Richmonder who volunteered with the Canadian Expeditionary Force in 1915 and was killed in action near Ypres on April 3, 1916.

John Christian Thurston was born on July 20, 1893, one of five children belonging to Charles Smith Thurston and Elmira Bernice Mann Thurston of Richmond. While I was unable to find a photograph of Thurston, his service record describes him as 5 feet 6 ½ inches tall with blue eyes and light brown hair. Also of interest, he is described as being “tattooed on both arms,” an interesting notation considering that he is also listed as being a Baptist.

Before joining the CEF, Thurston was a traveling salesman with a local roofing company. Perhaps it was the quality of this work that compelled him to head across the border to Windsor, Ontario to offer his services to Canada. At the age of 21, Thurston was declared fit for service and took the Oath of Allegiance to King George V on January 12, 1915.

Young Thurston was assigned Military Service Number A/298 and joined Company C, 1st Battalion Canadian Infantry (Western Ontario Regiment), CEF. The 1st Battalion arrived in France on February 11, 1915 and received its first big bloodletting just two months later at the Second Battle of Ypres in April 1915. The fighting would last through May, and the Canadian troops experienced a gas attack for the first time and lost over 6,000 men.

The 1st Battalion would go on to see more hard fighting in 1915 at places like Festubert and Givenchy and by early 1916 Thurston had become a hardened veteran. In a letter home written on February 2, 1916 he admitted that he thought his chances for seeing home again were slim and that he was going to ask for a discharge.

Apparently he had seen enough.

Just a few lines to let you know I am still in the land of the living. Received your letter of yesterday, and also a copy of the T.D. [Times-Dispatch] from M.C. [sister Mabel].

Well, the Germans made another smash below here at Verdun that cost them 300,000 men, and I expect they are going to try something here, but everyone is confident of the outcome. In fact I would like to get into another big fight with them, and in another two weeks the Canadians will decorate the front pages of the newspapers as they did this time last year.

On February 27 the captain of our company was questioning me in regard to my release, and as things didn’t materialize I saw him yesterday. He said it was up to the American consul in London, so I am expecting it every day, because no doubt there are miles of red tape to go through.

We are having beautiful weather, just like the weather at home in May, and if it were not for the noise of the guns one wouldn’t know there was a war.

I saw in one of the casualty lists the name of B. A. Rucker 1103 East Clay Street, Richmond, Va., United States Army, as being seriously wounded in the Eighteenth Battalion: also wrote to Lieutenant [Jimmy] Drake about six weeks ago, but haven’t had a reply yet. Will have to close for now.

Love to all, John

Tragically, Thurston’s discharge did not materialize in time, and a few days after he wrote home the 1st Battalion was pulled into the Battle of St. Eloi Craters in early April. South of Ypres, the operation at St. Eloi was designed as a diversion by British and Canadian troops to help the French hold on at Verdun.

The British had blown up several mines that obliterated the German lines and created a lunar landscape. The Canadians took over the British line on the night of April 3rd and found no trench line and no communication trenches – just mine craters that had turned into small lakes during the torrential rains of the preceding week. Even worse, this cratered landscape was on a forward slope in full view of the German lines and the Kaiser’s troops were able to fire into the Canadian lines from three different sides.

Pvt. Thurston did not survive the first night in this hellish atmosphere – he fell on April 3, 1916. He was just 22 years old. 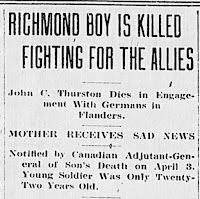 John Thurston is buried alongside his fellow brothers in arms who died in Belgium at Chester Farm Cemetery, which is maintained by the Commonwealth War Graves Commission. His grave reference is I. A. 5.

Americans who wish to honor his service can visit his memorial headstone at Riverview Cemetery in Richmond, Virginia.

Posted by Jimmy Price at 5:54 PM No comments: