An Interview with Mitch Yockelson on Forty-Seven Days: How Pershing’s Warriors Came of Age to Defeat the German Army in World War I

If you’re a First World War enthusiast, chances are you’ve noticed a new title flying off the shelves of your local bookstore entitled Forty-Seven Days: How Pershing’s Warriors Came of Age to Defeat the German Army in World War I. 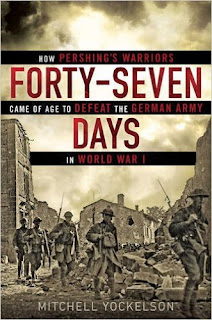 Lucky for you, the author of this excellent study just so happens to be my former graduate school advisor and a person I feel lucky to call friend. 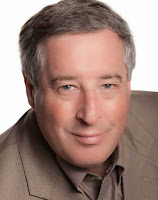 Mitchell Yockelson, recipient of the Army Historical Foundation’s Distinguished Writing Award, is an investigative archivist at the National Archives and Records Administration, as well as a former professor of military history at the United States Naval Academy. He currently teaches at Norwich University. One of America’s foremost experts on the First World War, he holds a doctorate from the Royal Military College of Science, Cranfield University, in the United Kingdom.  He has written biographies of Douglas MacArthur and Ulysses S. Grant and his first book – Borrowed Soldiers: Americans under British Command, 1918 – belongs on the bookshelf of every serious student of the First World War.

I recently caught up with Mitch to see how he was doing and to interview him about his exceptional new study of the Meuse-Argonne Campaign.

JP: Please tell the readers a little bit about yourself – what makes you “tick”?

MY: I have a strong curiosity about the past and why events happened how they played out. As a young boy I developed a passion for history and devoured every book I could find on military history. As I grew older and entered college, it was clear that I was going to major in history and focus on topics related to the U.S. military. Although I never served in the armed forces, I have a great admiration for the men and women who wore a uniform during previous generations and those who currently protect our country and are often in harm’s way. I have had the privilege of meeting many veterans through my work at the National Archives, as well as teaching for several years at the Naval Academy and through the Norwich University Masters of Military History program where I still teach.

JP: What initially drew your interest to the First World War?

MY: As a young boy I sort of knew who Pershing was because of a street named for him near my home. Then I read a brief biography of Alvin York written for young adults, but it really wasn’t until I became the World War I records subject area specialist at the National Archives in 1962, a position I held for 16 years, that my interest in World War I really took off. At that point I commenced reading every book I could find about the role of the U.S. in the war and was especially taken by Edward M. Coffman’s The War to End All Wars, which after almost fifty years remains the single best volume on the subject.

JP: What inspired you to write Forty-Seven Days?

MY: I had visited the Meuse-Argonne battlefields on a few occasions and had read up on the various aspects about the battle, but couldn’t really get a grasp on what happened over the course of those forty-seven days. I especially wanted to understand the role of General Pershing in the battle and why he relinquished command of First Army to Hunter Liggett. So when I started to conduct preliminary research for the book it became even more confusing and I realized that I am having trouble understanding the battle, then perhaps the same can be said of others. Now it became a personal mission to write a narrative for the general public on General Pershing and how he led the Americans during the largest battle in U.S. history.

JP: Many prominent historians have viewed the American contribution as a mere footnote in the larger narrative of events, but you write that, “When the smoke cleared, and the battle and the war were declared over, the American soldiers had carried the Allies to victory.” Could the Allies have won without the contributions of the Doughboys?

MY: Absolutely not. The Allied ranks were depleted after almost four years of war. While the same could be said about the Germans, they showed no signs of giving up. Even after the Americans started coming over in droves, the Germans were still putting up a strong fight.  But when the Americans launched the Meuse-Argonne battle on September 26, the Germans knew the end was near. Even though the American doughboys were largely inexperienced, they had tenacity and a willingness to learn how to fight on the Western Front. With more than two million Americans in Europe by the autumn of 1918 and another two million ready for deployment overseas, the U.S. was becoming the bulk of the Allied forces and were overwhelming the enemy,

JP: How would you rate America’s preparation for the centennial of U.S. military participation in World War I? Do you think Americans in 2016 can relate to their forbears of 100 years ago?

MY: The U.S. World War One Centennial Commission is up and running with dedicated volunteers across the U.S. There are all kinds of programs in the works that are designed to teach Americans about what happened 100 years ago during a conflict that brought the country into the modern age, but is now mostly forgotten. Unfortunately, in 2016, I think most Americans cannot relate to what happened during World War I, but I believe this will change when numerous public programs, exhibits and books appear in 2017-2018.

JP: What are some subjects pertaining to American involvement in WWI that need to be written about?

MY: This is a tough question to answer. I am not sure if anything needs to be written. But there are certainly topics on battles like the Meuse-Argonne that received previous attention that could be re-interpreted like I did. I am sure there are hundreds of stories dealing with home front in every city and town that could be explored. Few books discuss the German-Americans living in the U.S. and how they felt and were treated by other Americans. As the cliché says, the sky’s the limit.

JP: What books and/or projects are you working on now?

MY: Right now I don’t have plans for another book, at least on World War I, but that could change. I am happy to sit back and rest on the heels of Forty-Seven Days and see how it does.

I'd like to sincerely thank Mitch for taking the time out of his hectic schedule and encourage you again to go and get yourself a copy of Forty-Seven Days -- you won't be disappointed!
Posted by Jimmy Price at 6:31 PM No comments: