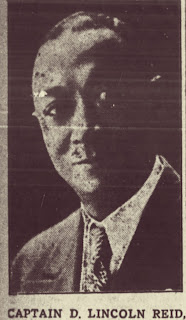 As the centennial commemoration of U.S. involvement in the First World War gets under way, one story that has been receiving some much needed attention is that of the famed 369th Infantry, an African American National Guard regiment from New York more famously known as the “Harlem Hellfighters.”

In 2014, Jeffrey T. Sammons and John H. Morrow, Jr. published the authoritative history of the regiment in Harlem's Rattlers and the Great War: The Undaunted 369th Regiment and the African American Quest for Equality. That same year, Max Brooks (son of comedy legend Mel Brooks) published a graphic novel about the regiment, which is now being converted into a six hour limited series for the History Channel. And in 2015, Sgt. Henry Johnson finally received the Medal of Honor for his heroic actions on May 15, 1918.

With my never-ceasing interest in teasing out stories of Virginians who served in World War I, I was chagrined to learn that the two well-publicized Virginia connections to the regiment – Henry Johnson’s alleged birth in Alexandria and famous Richmonder Bill “Bojangles” Robinson’s involvement with the famed 369th Hellfighters Band – were both erroneous (Johnson was born in North Carolina and Robinson never served in the regiment.)

Imagine my surprise, then, when I stumbled upon the record of a Hampton University student who did serve with the regiment…

…and was a native Virginian…

…AND won the Croix de Guerre leading black troops in another elite unit with a cool nom de guerre, the 370th Infantry Regiment, otherwise known as the “Black Devils.”

Ladies and gentlemen, I give you Captain D. Lincoln Reid – Hellfighter, Black Devil, and forgotten hero of World War I.

Dennis Lincoln Reid was born in Phoebus, Virginia in Elizabeth City County on October 1, 1880. I was not able to find much information about his life prior to World War I, other than the fact that he attended Hampton University (Class of 1901) and then moved to New York some time following graduation.

After moving to New York he found work as a clerk in the New York Post Office before enlisting in Company B of the 15th Regiment, New York Army National Guard in September of 1916.

The 15th had been established as an African American infantry regiment in 1916 following three years of bitter fighting and obstruction from the state’s National Guard leadership. William Hayward, a white Nebraska-born Public Service Commissioner, was put in command of the regiment.

Private Reid must have impressed his superiors, as he quickly jumped from corporal to supply sergeant to First Sergeant in less than a year. With the American declaration of war on April 6, 1917, the men of the 15th New York were hopeful that they would be allowed to participate in the American war effort and once again prove to the country that they were worthy of the full benefits of citizenship.

The question of whether African American officers would be permitted in the American Expeditionary Forces had not been resolved when The New York Age reported an astonishing bit of information on July 12, 1917:

“First Sergeant D. Lincoln Reid has been recommended for a commission as a second lieutenant.”

Just two days after this report, Reid was indeed promoted to second lieutenant. On July 25, 1917 freshly-minted Lt. Reid was mustered into federal service and the “Old 15th” was rechristened the 369th Infantry Regiment. In late 1917 the unit set sail for France, with Reid one of only five black officers in the regiment.

In December, the 369th landed at Brest and soon found themselves all alone, never receiving the anticipated orders to deploy to the front lines. Rather, the “black orphans” of the regiment were used as labor troops, constructing roads, digging ditches, unloading cargo from ships – anything but fighting. The officers received infantry training, but never had a chance to implement it.

Shortly after arriving, Col. Hayward remarked in a letter that “Lieut. D. Lincoln Reid [is] living at the French Officers’ Mess at our division Infanterie School, [an] honored guest.” While French adoration and good treatment of African Americans during the First World War has been overblown and distorted, Reid surely must have enjoyed being accorded all of the privileges of his rank.

Everything changed when the Germans commenced their spring offensive in 1918. Gen. Pershing responded to Gen. Foch’s desperate pleas for more men by saying, “All I have is yours.” With that, the 369th was handed over to the French 4th Army for use in combat.
After three weeks of training, the regiment joined the fight in April of 1918 and quickly showed themselves to be effective combat troops. The following month the exploits of Henry Johnson and Neadom Roberts were picked up by the press and the “Hellfighters” were household names back home in a matter of weeks.

In spite of this record of success, Pershing and the other officers at GHQ were worried by the presence of black officers in the 369th and elsewhere. What if one came in as a replacement for a white officer that was killed or wounded? Would white enlisted men be forced to submit to the orders of an African American?

These and other questions caused all of the black officers in the 369th, with the exception of famed band leader James Europe, to either be transferred to other units or to resign after being given numerous impossible tasks that they had no training for. Reid later expressed outrage over the treatment of Lt. Francis Eugene Mikell of the Hellfighters Band who resigned after he was given duties he wasn’t trained to do. It was obvious to Reid and others that he was treated this way for the express purpose of forcing his resignation to make way for white officers.

Reid’s orders came at the end of July, just as the Hellfighters had begun fighting in the Aisne-Marne sector.

“An order has come through today transferring Reid, whom I had recommended for another promotion… to the 370th. Reid had made no application. He is a fine man and good soldier, has performed his duties well.” (emphasis in original.)

Reid was transferred to Company I of the 370th Regiment (formerly the 8th Illinois) a unique unit completely officered by African Americans. The 370th had a fighting record every bit as impressive as the Hellfighters, and in mid-August of 1918 Reid and his fellow “Black Devils” plunged into heavy fighting in the Oise-Aisne sector.

In October, Reid was awarded the Croix de Guerre with Bronze Star for “successfully maintaining a heavy mixed French and American combat patrol in a dense wood while the battalion on the right tried vainly for six days to bring up and consolidate the line.” The Southern Workman reported that “although slightly gassed, he otherwise escaped uninjured.”

After fourteen months of overseas service, Lieutenant Reid returned to New York in early 1919. His love for his old regiment caused him to rejoin the 369th, and on May 19, 1919, Governor Alfred E. Smith commissioned him as a captain. He would continue to serve with the unit until July of 1924.

Unfortunately for Reid and his fellow black veterans, participation in the Great War did not bring about the societal changes that they were hoping for. He experienced this firsthand after being appointed a member of the Executive Committee of the Theodore Roosevelt Post No. 1 of New York’s American Legion.

In 1919 Reid attended the Legion’s national meeting, held in Dallas, and was refused accommodations due to the state’s Jim Crow laws. Thankfully, the New York delegation pledged to stand by him and he was finally admitted to the hotel where the meeting was being held.

He and his fellow black officers of the 369th later signed a petition to have the unit “officered entirely by colored men.” The petition cited Reid’s other unit, the 370th Infantry, as a successful example.

After his postwar service with the 369th, Reid was a foreman in the Mailing Division of New York’s General Post Office. In a biographical profile published in 1931 it was noted that “Capt. Reid…still has the spirit of ‘Over There’ in his bones.” The profile went on to describe his life in postwar America:

“Capt. Reid…is a trustee of Williams Institute Church…president of the Southern Beneficial League, an Elk, a Mason, [and] interested in civic and social betterment. [He] lives with his wife, a well-known social worker and a singer in their church choir…There are two children, a boy and a girl; the boy is at Fisk, and the girl at Virginia State.”

In 1932, Reid was appointed to the prestigious position of Finance Officer in the Jesse Palmer Post of the American Legion. He stayed in New York for the rest of his life and died on April 5, 1967 at the age of 86. He is buried in Long Island National Cemetery, plot 2W, grave 3788.

After World War I, America saw some of the ugliest and most shameful examples of racial violence and oppression in its entire history. It would take another world war for the civil rights movement to gain the necessary traction needed to start the process of national change. However, if it were not for Reid and others who “returned fighting” for a better America, the civil rights movement could have faltered and delayed progress indefinitely.


For that, and his service in hell, we owe him a debt of gratitude.
Posted by Jimmy Price at 10:54 AM 1 comment: